On two consecutive Friday evenings, Julie and I have taken a boat ride to the sand with her kayak. 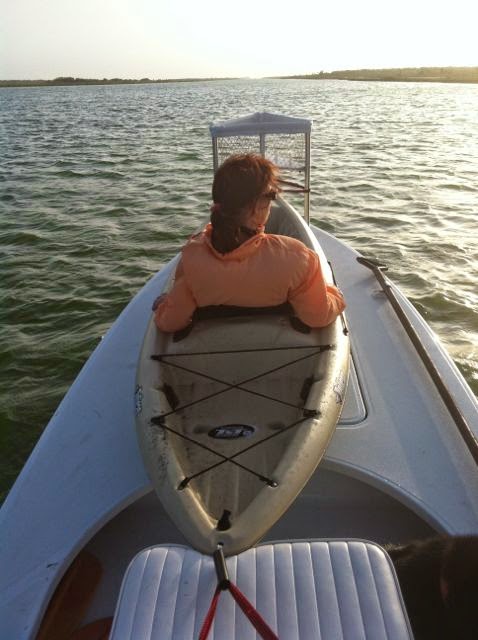 There, she takes her kayak downwind while I wade further east into bootie deep water where a "few good fish" can often be found coming upwind in the low sunlight, visible as dark shadows in the clear water. Then, after half an hour or more, I return to the boat and drift downwind and pick up Julie for our ride home. On the way, I have stopped in a favorite muddy lagoon for just a few minutes, to see if the laughing gulls were working over pods of redfish. We have entered the lagoon on both Friday evenings, and stopped immediately in front of several pods of fish feeding visibly under birds. However, the pods have been comprised wholly of saltwater catfish--not a very desirable catch, since they have poisonous fins that often wound an unwitting angler. Knowing that the reds were probably there, too, but not so conveniently marked in the muddy waters, I stepped off the boat and simply observed the melee of mullet, catfish, and barely discernible signs of larger fish.

On my first visit to the lagoon over a week ago, while standing and watching, I saw a vague wake and made my first cast. Ten minutes later, I landed a 27+" redfish after dragging it back to the boat for a photo. I released it and we headed home. 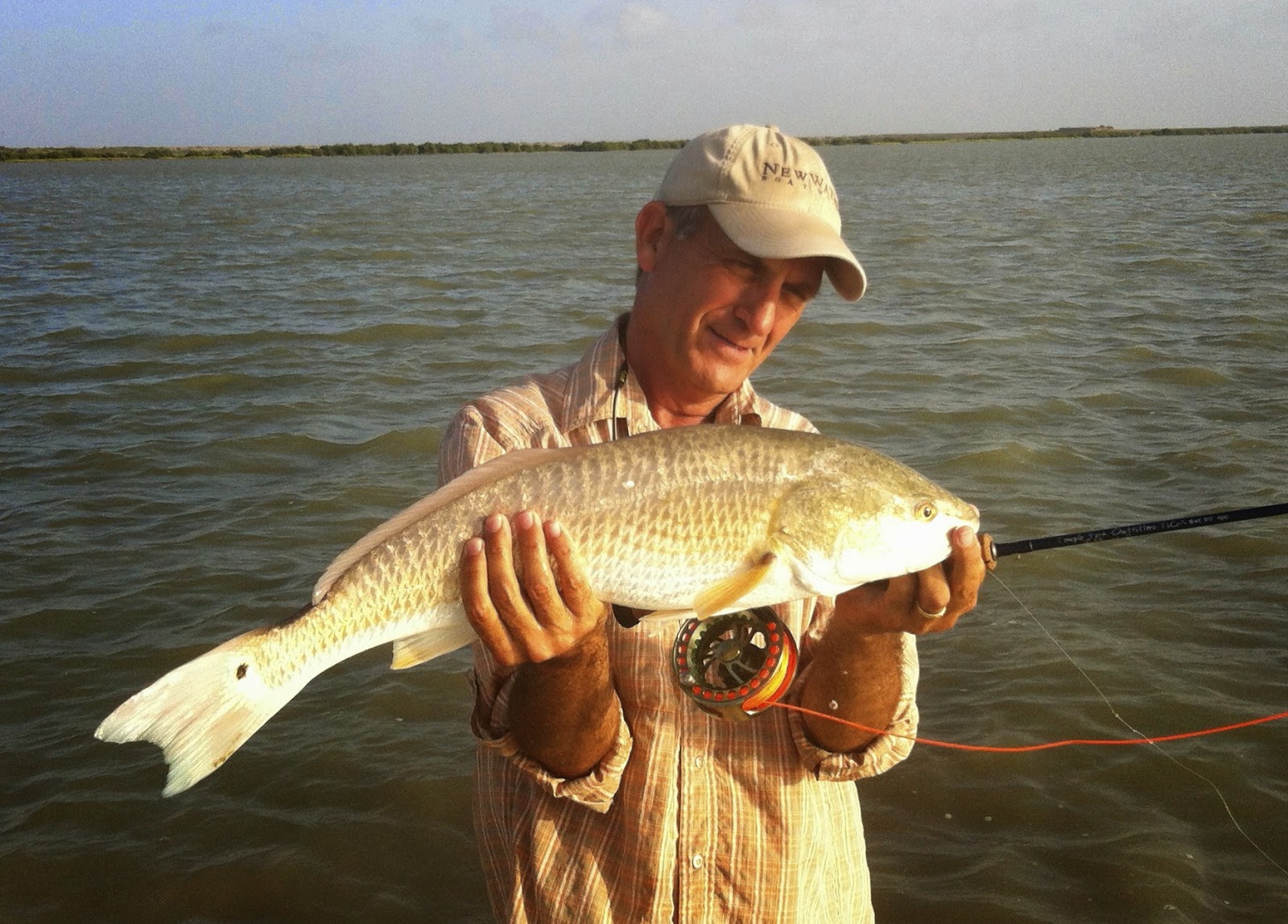 A week later, just this past Friday, we returned to the same spot and found the same roily conditions with balls of catfish feeding under crazed laughing gulls. There were no obvious signs of redfish, but again I simply stepped off the boat and walked 50 yards and stopped. After a few minutes, I saw the tip of a tail that I thought was a catfish. But not knowing for sure, I casted to it, and stripped the fly slowly past where its head could have been. I felt a tug, and grimaced, thinking that I would soon have to deal with a spiny catfish at the end of my line. But instead, a fish with considerable authority ripped my line and drove a huge wake in the 9" water. Fifteen minutes later, I landed a 30" red at the boat, took a photo, and released him. 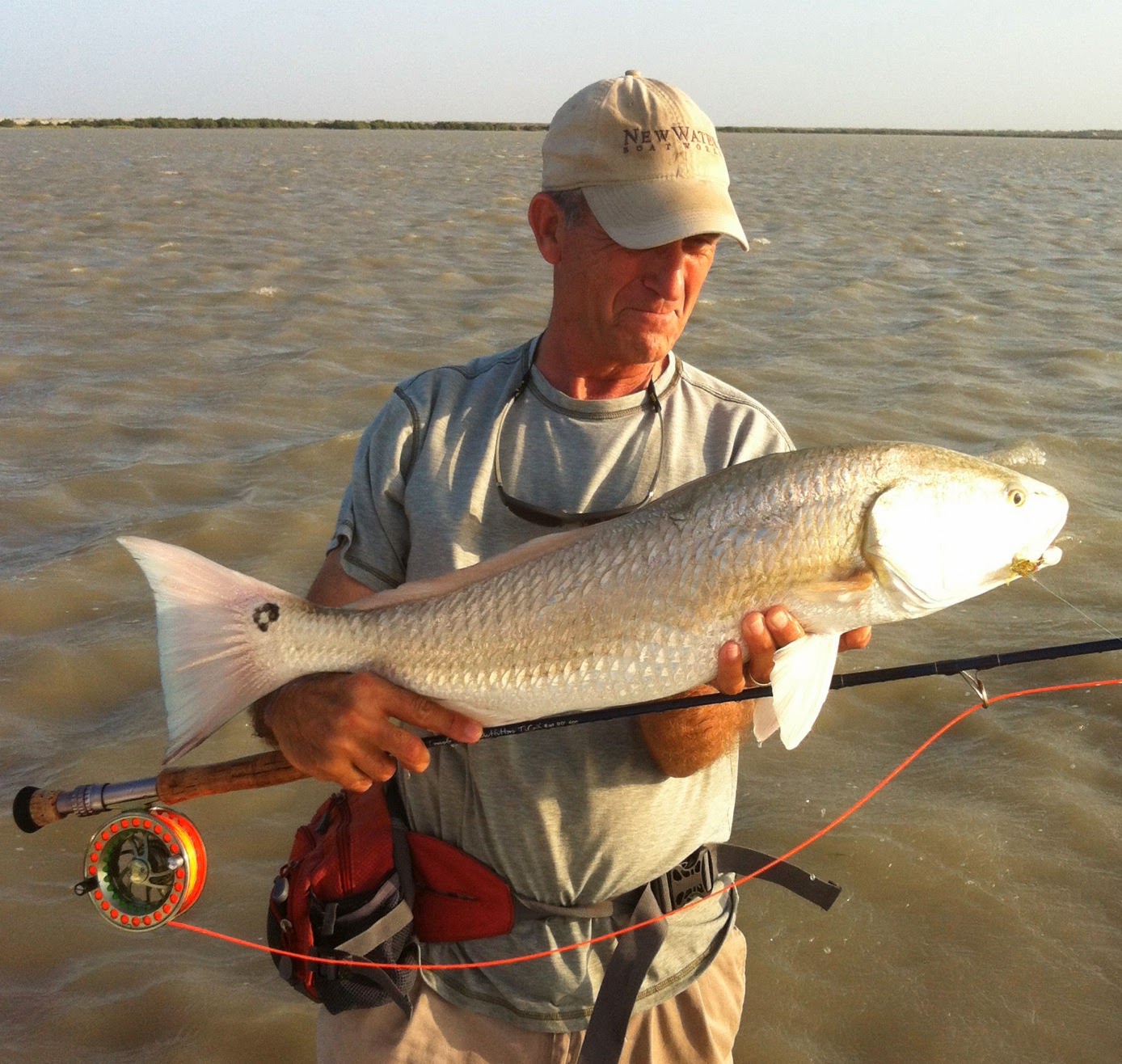 I'm not telling you this as a way of bragging. I am telling you because I was amazed, and believe there's something to be learned from these successes. Both felt, from one perspective, like miracles. But from another perspective, they felt as easy and as natural as a laugh. It happens all the time, as Julie has observed time and again. Why is this possible, you might ask?

What I experience on the water is what I want my clients and friends to experience: To immerse oneself fully in the context in order to perceive what's there, but unseen. The Buddhists refer to this meditative process as "stopping and seeing." Both are natural components of experiencing fully.

When all agitations have ceased and not a single wave arises, myriad phenomena are clear, without confusion, without obstruction. Thus seeing is not separate from stopping. Once the layers of obscurity have been cleared and no clouding occurs, the ten directions are empty, without stirring, without agitation.
http://www.dailyzen.com/zen/zen_reading0511.asp


The "stopping" involves allowing all of the perceptual information into your awareness by surrendering the assumptions that filter the information into biased observations. For example, an angler can stand on an open flat, and say, "There's nothing here," and he will see nothing because he has failed to "stop" his limiting assumptions. Or he can stand there and open himself to the full array of information that normally gets constricted by assumptions. Then, once the full array of information is flowing into one's awareness, one can begin a process of "seeing" -- that is, concentrating on emergent phenomena that may have been invisible beforehand. The "signal" that one is looking for often becomes evident only once all of the data is considered. I have often heard master anglers say, "I can see fish even when there's nothing there." What they're saying is that they are permitting subtle information to pass into deep awareness without the usual biased and constricted filtering. They see things that others don't see, simply because they are more open to the fullness of their experience.

But one cannot be aggressive or ambitious to allow this process to unfold. That shuts down seeing, and it prevents the "stopping" by being attached to crude measures of success. Indeed, the paradox inherent in this process is that, fundamentally, one cannot have much ambition in order to succeed. For myself, I don't much care if I catch a big fish or not, because the richness of the experience means more to me than that. When a person with sufficient skill and experience surrenders one's assumptions and becomes open to the moment, everything becomes possible, but nothing is really needed.
at July 30, 2014

Dr. Gregory Scott Sparrow
McAllen, Texas, United States
I wear several hats--college professor, dream researcher, psychotherapist, writer, fly fishing guide. I am active in the International Assn. for the Study of Dreams--former Board Chair and President. I am a Professor of counseling at the University of Texas Rio Grande Valley; a charter faculty member of Atlantic University; founder of DreamStar Institute, which offers mentoring and certification in dream analysis; and director for DreamStar Free Online Counseling. See my writings and certification program at www.dreamstarinstitute.com, my therapy practice at www.drscottsparrow.com, and my flyfishing videos and articles at www.lagunamadre.net. I have written several books in the field of dreaming and the spiritual journey, including I Am with You Always, Blessed Among Women, Lucid Dreaming: Dawning of th eClear Light, and Healing the Fisher King: A Flyfisher's Grail Quest.