I’d like to share with you some OOBE experiences I have had over the past couple of years. I hadn’t put them together, but during one of them a couple of weeks ago, I was saying goodbye to a man who I was ostensibly visiting on another planet. I asked him if he knew of Earth, and he said yes, that he’d been there. I then asked him how far away it was from his star system. He said, “52 lunar circles.” When I woke up, I realized that he could have been telling me how far, in terms of light years, which meant 52 lunar cycles, or exactly four light years. I remembered reading that a possibly inhabitable planet had been discovered, so I researched it to find that Proxima B, in the star system of Proxima Centauri, is about 4 light years away.
There were two other OOBEs from earlier—both over an hour long, and ostensibly on another planet where I spent time with various humanoid beings in an earth like environment, but I never considered the experiences literal in any way. In one, I stood on a hillside with an old woman and a boy at the end, and looked up at their sky, where I saw three suns. When it was over, I thought, “That’s got to be symbolic,” and I dismissed the literal possibilities. Then, in another very long experience in which I spent a long time with a woman and her daughter on another planet (both of whom looked human, but had a feathery-like, retractable organ above their heads that permitted them to "read me." The daughter then asked me if I would be her teacher, but I explained that I was from a different world (which she seemed to know). After saying goodbye to them, a man accompanied me to a place from which I could return to my body and planet. I asked him what it was like to live on his planet. He said, “The seasons are very stable, and the sun never sets.” 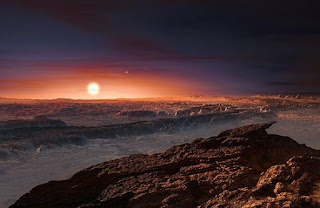 What blew my mind was finding out later from my research, that if one were to stand on the surface of Proxima B, he would see the double star of Alpha Centauri, as well as Proxima Centauri—three suns! And what’s more, astronomers believe that Proxima B always faces Proxima Centauri—it circles the star very 11 days, and (similar to our moon) has a light and dark side.
What are the chances that all of these things could be literally true of an actual star and planet? I thought you’d get a kick out of this. Stay tuned to more (apparent) excursions beyond the body!

For more about Proxima Centauri and Proxima B, see the SETI site at http://www.seti.org/seti-institute/news/proxima-centauri-b-have-we-just-found-earths-cousin-right-our-doorstep

Dr. Gregory Scott Sparrow
McAllen, Texas, United States
I wear several hats--college professor, dream researcher, psychotherapist, writer, fly fishing guide. I am active in the International Assn. for the Study of Dreams--former Board Chair and President. I am a Professor of counseling at the University of Texas Rio Grande Valley; a charter faculty member of Atlantic University; founder of DreamStar Institute, which offers mentoring and certification in dream analysis; and director for DreamStar Free Online Counseling. See my writings and certification program at www.dreamstarinstitute.com, my therapy practice at www.drscottsparrow.com, and my flyfishing videos and articles at www.lagunamadre.net. I have written several books in the field of dreaming and the spiritual journey, including I Am with You Always, Blessed Among Women, Lucid Dreaming: Dawning of th eClear Light, and Healing the Fisher King: A Flyfisher's Grail Quest.